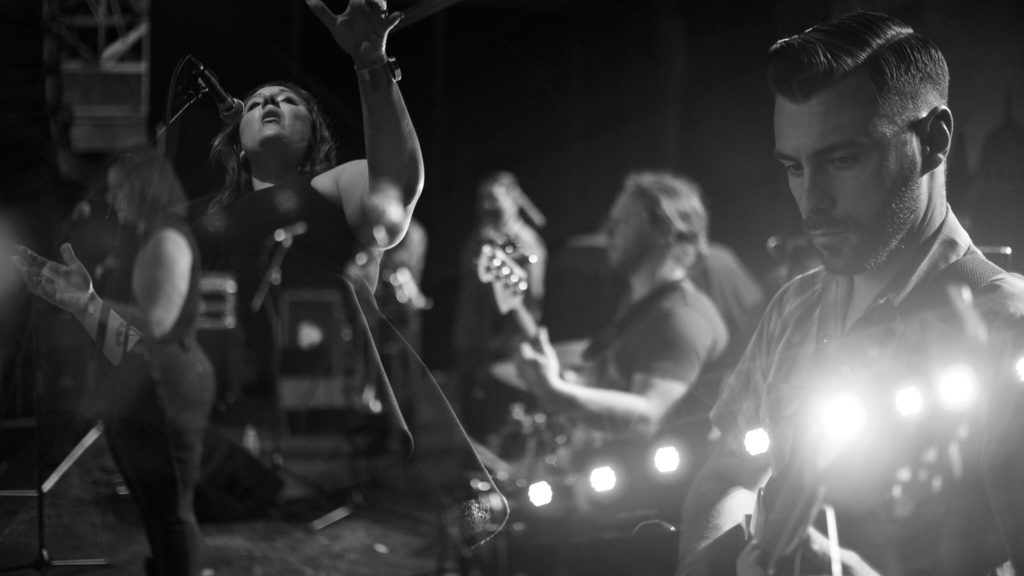 “…she brings it on the powerhouse vocals front.” – Noisey (View HERE)

“She’s a powerful singer…The ‘Nashville sound is known for polish. This is something else…the beginning of something big.” – Garden & Gun (View HERE)

“In less than a year, they’ve intoxicated the city of Nashville with their sultry blend of soul, funk and pop. This band can walk on stage to a crowd of cell phones and blank stares and leave behind a mob of sweaty, enthusiastic new fans.” – American Songwriter (View HERE)

“Saying Alanna’s voice is powerful is an understatement, since it could quell a peasant uprising with its mere ferocity.” – No Country for New Nashville (View HERE)

“In less than a year, they’ve intoxicated the city of Nashville with their sultry blend of soul, funk and pop. This band can walk on stage to a crowd of cell phones and blank stares and leave behind a mob of sweaty, enthusiastic new fans.” – American Songwriter

Powerhouse Soul / Funk / R&B band Alanna Royale originally formed as an experimentation with grunge music. They quickly found the lack of authenticity to pale in the comparison of the true magnetism of the group, finding solstice in Pop and R&B music. “There’s a deep range of intent from the beginnings of R&B music that went between making music to entertain and help people forget the troubles of the world they lived in, to making music that shed light on those troubles,” says Alanna. “Soul music has long been the voice to tell the story, the high’s and low’s. It lives deep within us.”

Raised in Albany, NY, Alanna embraced her heritage while finding her voice. “I was raised by a single Puerto Rican woman who pushed me to go after everything in life I ever wanted,” she says. “My mother was always the boss and taught me to take no shit.“

The band has made a reputation for themselves organically by being punks against the Nashville corporate machine, the anti-typical sound paving the way for Soul, Funk and R&B in a city lacking genre variety.  The press took note too. Alanna Royale was spotlighted by Noisey as being part of the Nashville music renaissance in “The New Nashville: Eight Acts Rebelling Against The City’s Country Music Reputation” feature (view HERE). Noisey took note of Royale’s pure talent saying, “…she brings it on the powerhouse vocals front.” Garden & Gun noticed as well, proclaiming,  “She’s a powerful singer…The ‘Nashville sound is known for polish. This is something else…the beginning of something big.” View “Nashville’s New Tune: The Next Music Row” feature HERE. Meanwhile, local AAA radio station Lightning 100 began showing their undying support for the band’s music. View segments HERE.

Around the same time, Alanna Royale began noticing a cosmic shift. “I think our EP release show here in Nashville was when we decided that this band was something worth investing our time and emotion into,” says Alanna. “The Basement was packed and our band was so brand new. It felt amazing to see the love from a country/indie rock dominated scene for a baby R&B band.”

The band’s first full-length debut album ACHILLES released in Sept 2014 with Andrija Tokic at the helm of production in his analog studio The Bomb Shelter in East Nashville. View NPR Music’s The Record’s feature with Ann Powers on the studio HERE. “It was recorded off-and-on for about six months,” Alanna told American Songwriter in their Best New Music feature, “During that time, I was recovering from a hemorrhaged vocal cord and the physical and vocal therapy was intense. It took a serious toll on me mentally and emotionally and Andrija was firm yet patient during this process. He challenged me to accept my natural sound but pushed us all to the edge of our musical boundaries.”

Alanna’s vocal suffering became the inspiration for the album title from bassist Gabriel Golden observation of the experience. “I was left in a lot of pain and with very limited vocal abilities,” says Alanna. “I became depressed on the road and in the studio and our recording process was difficult to get through. Gabriel made mention that everything was riding on this tiny little piece of my body. Much like achilles and his heel. We came out on the other end of it a better band and closer friends than ever.”

With Alanna’s vocals in full recovery, it wasn’t long after the release of ACHILLES that the band was making debut appearances at major festivals, including Bonnaroo Music & Arts Festival, Austin City Limits and Loufest. The band quickly made a name for themselves as a must-see live act, opening shows for St. Paul and the Broken Bones, Lee Fields, Hurray for the Riff Raff, Big Freedia, Trombone Shorty, Mayer Hawthorne and Monophonics. The opportunity knocked for Alanna to tour with The Alabama Shakes. “I chose to push on with Alanna Royale rather than change lanes into background singing,” says Alanna.

In question of the persona that both identifies and define the artist of the modern social media era, she says, “I love the name Alanna Royale because it sounds cheap and luxurious all at once. It conjures up images of a classic car or a Tarantino reference. It doesn’t sound like just one thing.” That in itself wraps up the perfect description of a band dabbling in various sounds to create something unique in itself. Not just one but a variety of sounds that stretch the limitations of Nashville, live music and beyond to conjure what it means to feel the freedom of live experience with a band that is unforgettable.